Six months ago, I wrote about the New Horizons mission to Pluto, and predicted the NASA scientists would be surprised by the former-planet’s youth once the spacecraft arrived there. 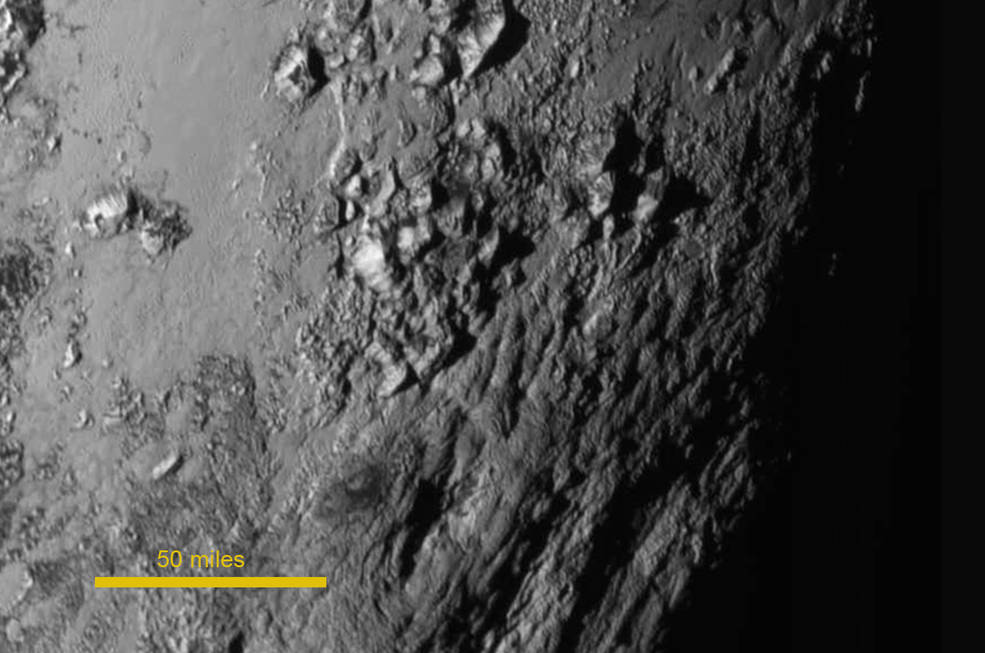 New close-up images of a region near Pluto’s equator reveal a giant surprise: a range of youthful mountains rising as high as 11,000 feet (3,500 meters) above the surface of the icy body.

The mountains likely formed no more than 100 million years ago — mere youngsters relative to the 4.56-billion-year age of the solar system — and may still be in the process of building, says Jeff Moore of New Horizons’ Geology, Geophysics and Imaging Team (GGI). That suggests the close-up region, which covers less than one percent of Pluto’s surface, may still be geologically active today.

Moore and his colleagues base the youthful age estimate on the lack of craters in this scene. Like the rest of Pluto, this region would presumably have been pummeled by space debris for billions of years and would have once been heavily cratered — unless recent activity had given the region a facelift, erasing those pockmarks.

“This is one of the youngest surfaces we’ve ever seen in the solar system,” says Moore.

Unlike the icy moons of giant planets, Pluto cannot be heated by gravitational interactions with a much larger planetary body. Some other process must be generating the mountainous landscape.

“This may cause us to rethink what powers geological activity on many other icy worlds,” says GGI deputy team leader John Spencer of the Southwest Research Institute in Boulder, Colo.

Perhaps they would do better to rethink Pluto’s age. The Bible declares that God made all of the heavenly bodies on day 4 of creation week, only about 6000 years ago. That’s why literally all of the the objects in the solar system look much younger than Big Bang scientists expect.

Take for example another post on the NASA blog, just prior to the one on Pluto, titled Charon’s Surprising and Youthful Varied Terrain:

Mission scientists are surprised by the apparent lack of craters on Charon. […] relatively few craters are visible, indicating a relatively young surface that has been reshaped by geologic activity.

Another example is the mysterious bright spots on Ceres that were discovered by the Dawn spacecraft:

The closer we get to Ceres, the more intriguing the distant dwarf planet becomes. New images of Ceres from NASA’s Dawn spacecraft provide more clues about its mysterious bright spots, and also reveal a pyramid-shaped peak towering over a relatively flat landscape.

Dawn has been studying the dwarf planet in detail from its second mapping orbit, which is 2,700 miles (4,400 kilometers) above Ceres. A new view of its intriguing bright spots, located in a crater about 55 miles (90 kilometers) across, shows even more small spots in the crater than were previously visible.

At least eight spots can be seen next to the largest bright area, which scientists think is approximately 6 miles (9 kilometers) wide. A highly reflective material is responsible for these spots — ice and salt are leading possibilities, but scientists are considering other options, too.

While it is possible that these spots are being caused by a reflective material, I think the most likely explanation is that the region at the center of this crater is volcanically active and that these spots are caused by the presence of hot magma in the region. Of course, the scientists would never expect that. A body so small would be cold and dead after billions of years.

The heavens declare the glory of God; and the firmament sheweth his handywork. Day unto day uttereth speech and night unto night sheweth knowledge.

Without a knowledge of the Creator, these scientists and their spacecraft are literally wandering around in the dark.